In a short walk from the main piazza Tasso in Sorrento’s town center, walking through Via Luigi Di Maio toward the sea, you will reach Piazza Saint Antonino, where lies the Basilica of St. Antonino. 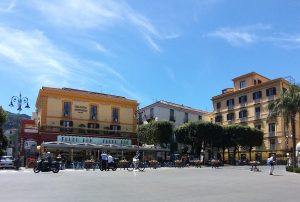 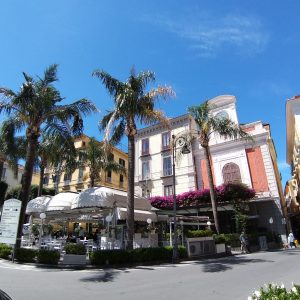 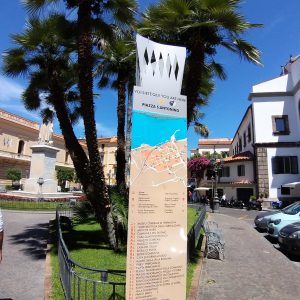 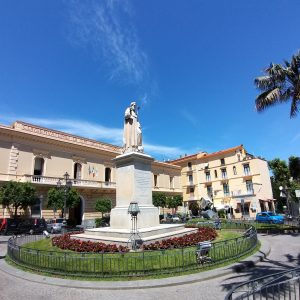 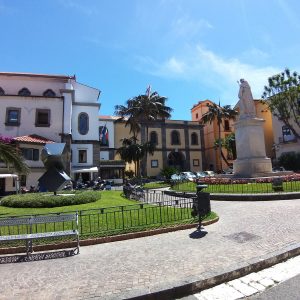 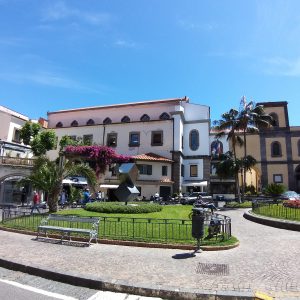 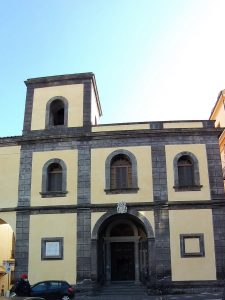 The Basilica of Saint Antonino

The Basilica is named after Sorrento’s patron saint, considered one of the most important churches on the Sorrento coast. In the IX century, the Basilica was already an oratory dedicated to Saint Antonino. The origin of the Church dates to the XI century.

Who was Saint Antonino:

He was a Benedictine monk named Antonino Cacciottolo of Sant’Antonino Abate lived in Campania d’Eboli, in Salerno’s province in the 6th century. He lived in Sorrento. During his life, he performed numerous miracles, including one in which he rescued a child swallowed by a whale, which was considered Holy. Saint Antonino is the patron saint of the city of Sorrento. He died on February 14, 625. Since then, on this day in Sorrento is celebrated its patron saint Sant’Antonino.

Entering the Basilica, after the arched portal, going up by four steps, you access the lobby; there is a crest on the wall behind the urn with Monsignor Francesco’s Gargiulo remains. Above are the two whale ribs from the miracle with the swallowed child.

The lobby with the urn and the Weil’s ribs

The Interiors of the Basilica of Saint Antonino:

The Basilica of Sant’Antonio, with a can cross, is divided into three naves by twelve marble columns, Coming from one of the “villas maritime” since Roman times. The central core has a lacunar-painted ceiling. The significant part is a painting by Giovanni Batista’s lama from the XVIII with the story of Saint Antonino, Who frees from the devil, the daughter of Siccardo Prince Benevento (1743).

The central part, the columns, and the paintings on the ceiling

The paintings and Sorrento’s plaque

At the central part of the building, above the marble columns, you can see oval paintings (on each side) depicting scenes from his life. On the right side, you see  St. Antonio rescuing a bricklayer falling from the belfry. The appearance of the Saint in front of the sculptor who made his silver statue. The release of a woman obsessed with the devil, the escape of Saracens, the saints’ visit at Sorrento, and his phenomenon to Pope Gregory I, who unfairly blames St. Catello.

On the left side, you see the depicted saving of a boat from a shipwreck, healing of a priest poisoned by a snake, rescue of a goat, and the liberation of builders pinned under a rock.

The main Altar has five steps. The Altar belonged to the Holy Trinity’s Monastery in honor of Monsignor Vinicio Cala on June 1, 1814. On the oval wall behind the Altar are wooden icons with St. Antonino, St. Bacolo e Athanasiou, St. Renato, and St. Valerio painted in 1648.

In the Basilica of Santo Antonio, there is also a statue of Saint Anthony in silver, made on February 3, 1564, by Scipio of Constantine Neapolitan goldsmith. The legend says that the first statue was completed in 1494, followed by a Saracens raid on 13 Junius in 1558, and was plundered and fused to obtain weapons. The will of the people of Sorrento was to make a second statue but lacked funds; the work was late to be finished: it was thus the same Saint Antonino who appeared to the Neapolitan goldsmith who had been in charge of carrying out the work. He (Saint Antonino) appeared and delivered the rest of the missing sum and showed himself for some time, In a way to be observed well so that he looked exactly like him. When Sorrentinians were ready to pay, they went to the craftsman who told them about the miracle, and as evidence of this, they added a bag in the Saint’s hands, a symbol of the amount the Saint had paid.

The silver statue of Saint Antonino

The silver statue of Saint Antonino

A double-ramp staircase leads to the Crypt below. The Crypt of the Basilica is the most visited part. Inside the Crypt are the remains of the patron saint of the city. In the Crypt are concentrated the devotees of the Patron Saint Antonino. It starts from the Crypt walls enriched by the former vows, which are the testimony of faith in the Saint, the graces received, and many “paintings” that reproduce prodigious sea rescues. The Crypt center is the Saint’s statue, where behind it is the perennial oil lamp with silver foil visitors recites the prayer.

Saint Antonino is the patron protector of the seamen of Sorrento. 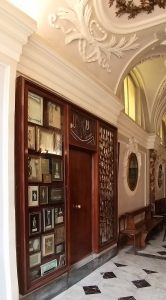 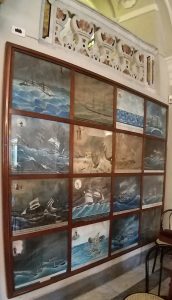 And the seamen vow in memories of their rescues.

Inside the Basilica di Saint Antonino, You feel the smell of the sea and mysticism. 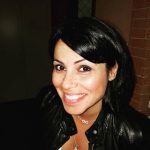 Being a family company, MSC Cruises is an excellent option for families traveling with...

The Family Parties On Board MSC Seashore in the...

The family time it's Fun Time! The family parties on board MSC Seashore with games...

Ocean Cay MSC Marine Reserve is a piece of paradise in the Bahamas. Aside...

Easter On Board MSC Seashore at the Caribbean 2022

Cruising at Easter is like spending a week discovering the Caribbean, history, and culture,...

Ocean Cay MSC Marine reserve is 65 miles south of Miami in the tropical...

Cruising with MSC Seashore in the Caribbean, Spring 2022