the meeting place of the aristocracy of the city.

In this particular place, the affluent families and the nobles (men only)

have gathered to solve the city’s most critical problems,

Sedile Dominova, on via San Cesareo (the ancient main street of the city)

Via Padre Reginaldo and Via San Cesareo, in the historic part of Sorrento.

Back then, there was only one Sedile in Sorrento,

which was located at the city’s gates, currently Piazza Tasso 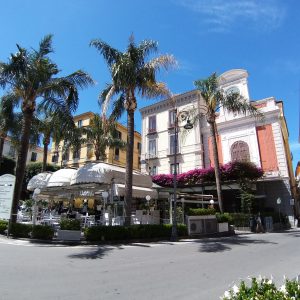 The old Sedile on Piazza Tasso

After conflict among the nobles, it grew into a rebellion;

This is the last surviving noble Seat in the entire region of Campania. 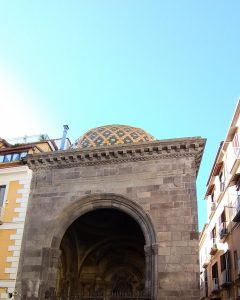 in support of the workers.

To this day, the Seat performs its function.

The city’s pensioners gather to discuss the city’s news,

The beautiful architecture of the building,

which has been preserved since the Middle Ages,

becomes an invaluable attraction, which attracts hundreds of tourists every year.

The building’s construction took a little time to be built;

with two walk arches and one spherical dome.

To build the Seat, Dominova uses the typical construction material

for the Sorrentino Peninsula – tiff (Tufo).

The Seat Dominova has a domed structure covered with

They resemble the shape of the flake of fish.

The tiles were made of Neapolitan riggiorali and placed in the 1700s.

Of particular interest is the interior decoration,

where ordinary smooth walls are ornate with frescoes.

The coats of arms and the heraldic symbols of the noble’s family,

the components from Sorrento and numerous columns in depth are depicted,

which visually increases the space from within.

The theme of the frescoes is from biblical stories with mythological motifs.

These magnificent frescoes were painted in the 18th century

by an artist who belonged to a school of the famous Italian artist Carlo Amalfi.

Artist Petnya painted the lower part of the dome in the 19th century,

For which he receives 52 dukes. (as seen on the original document

found inside the Seat Dominova)

The walls on the arch and all upper parts drawings,

located at an altitude more than a meter and a half,

are preserved in excellent conditions.

But everything else below this level is unfortunate,

no longer subject to restoration.

The floor of Domino’s Seat has been restored several times,

and the wooden entrance doors.

with the five rhombuses (worn by angels).

Sedile Dominova has kept his original look through the years.

The Domino’s Seat is illuminated with special illumination,

Emphasizing the frescoes’ beauty and the high vault in the evening.

Which means- sprayer. They called it that because

Were the women of Sorrento went to fill the water in their ceramic amphorae.

Currently, the tap is moved down via San Cesareo. 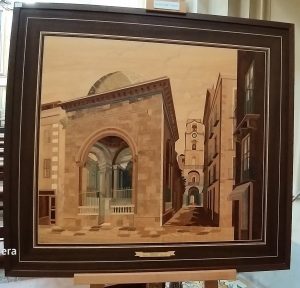 Near Seat Dominova are located:

Cloister of San Francesco and Villa Comunale (Torna Surriento Come back to Sorrento &#8211; Part 2 &#8211; The Municipal Villa and the Church &#8211; St. Francis and the Cloister of St. Francis in Sorrento

From Sorrento with Love ❤

On a cruise around Mediterranean Sea with MSC Grandiosa...

Vacationing on a cruise ship has been and will remain an exciting experience, even...

"Here, there are beautiful fields of olive trees with silver-gray leaves, similar to nodding...

The port at Marina Piccola in Sorrento, Italy.   Set in a picturesque position on a...